Island Hopping Around the Mediterranean 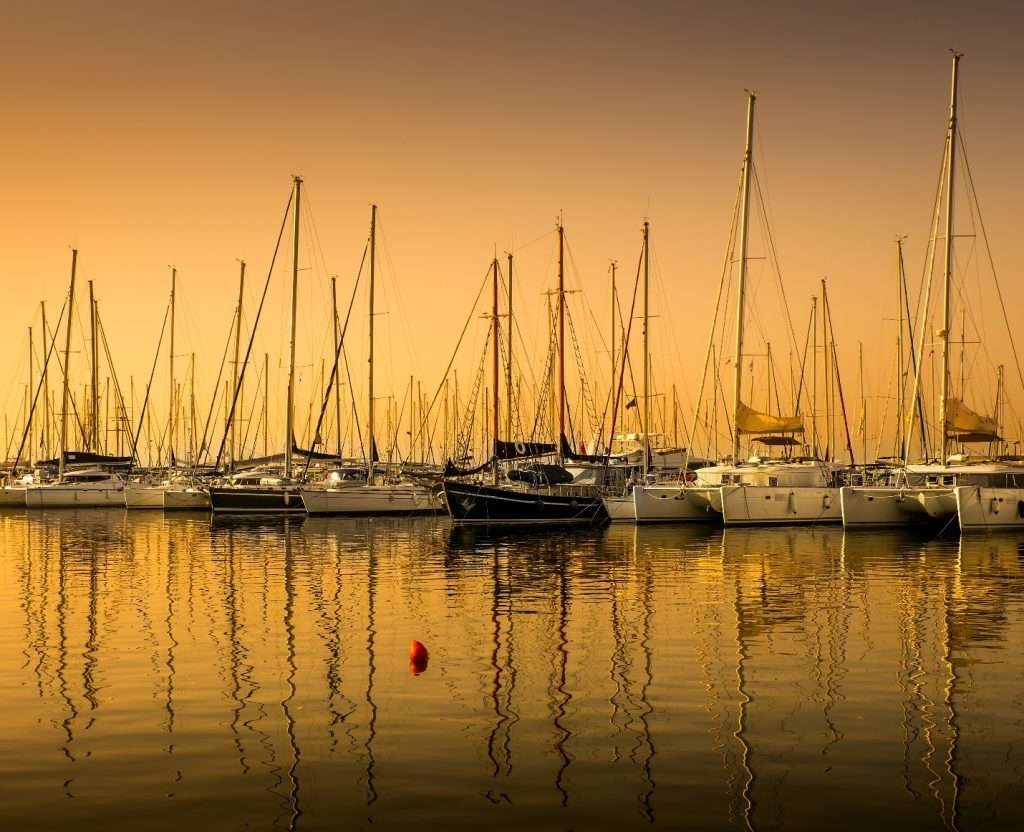 Figure 1 Yachts in the Bay of Athens – Deposit Photos

I love islands. Until I started writing this piece, I didn’t realize just how much of my travel time has been spent on various islands over the years. I’ve arrived by various modes of travel—plane, ferry, sailboat, cruise ship, and car across a land bridge. I don’t search out places to lie on the beach in the sun. I look for places of cultural significance, history, and natural beauty where I can visit and learn something new at the same time. I also love to revisit old favorites many times over.

Rhodes, Greece, and the Knights

Of all the islands I have seen, my favorites are probably any of the Greek islands. I have traveled to various ones any number of times. One of my original favorites was Rhodes. The blues of the sky and sea are so—well—blue. Intense and heart rending in their intensity. And the white is crystalline and almost blinding, contrasted starkly with the reds and fuchsias of the bougainvillea that attach to nearly every wall. The history of the Knights on this island is fascinating, as are the medieval fortifications, the Grand Masters Palace, and the museums. The Castle of Rhodes in Old Town is a UNESCO World Heritage site. Today, the statues of two deer, named “Elefos” and “Elafina,” stand at the entrance to Mandraki Harbor where once the feet of the Colossus of Rhodes, one of the seven wonders of the world, were firmly planted, supporting the thirty-three meter bronze statue of the Greek sun-god Helios. A week here was not nearly enough, but I have yet to return. Someday, for sure. 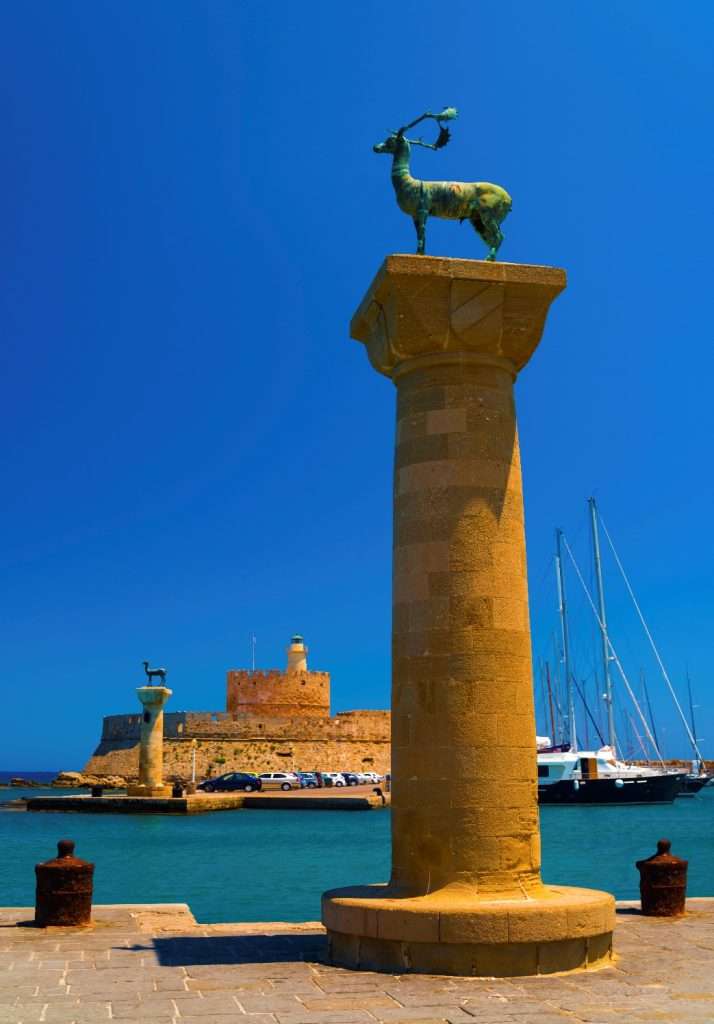 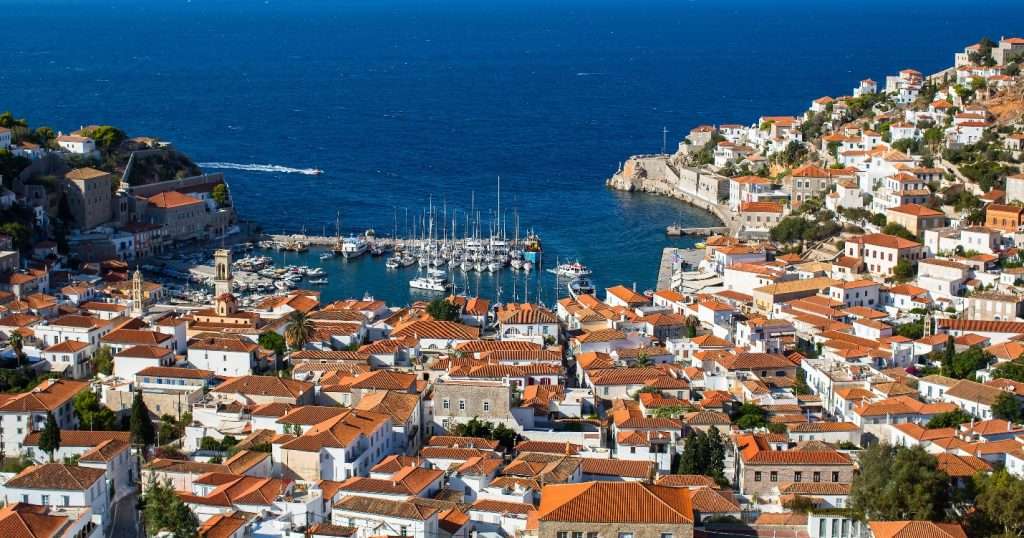 The best visit though was to the island of Hydra in the Saronic chain of islands. My husband and I sailed there in April one year with a Greek friend of ours on his 53-foot Beneteau sailboat. As far as we were all concerned, then and to this day, there is no better way to see Greece than from the deck of a sailboat. This particular visit to the island of Hydra was for Greek Easter, an important time of celebration in Greece. We were just the three of us and Christos handled the Beneteau like he handled his art. He was a lead dancer in the Greek National Ballet. His last performance, which we were privileged to see in Athens, was as Zorba, in Zorba the Greek. The Beneteau leaped and danced in the confused seas that are so typical of the Greek waters in the same way Christos made his powerful leaps on stage during his stellar performance as Zorba. The dolphins who tracked along with us off the bow did the same. 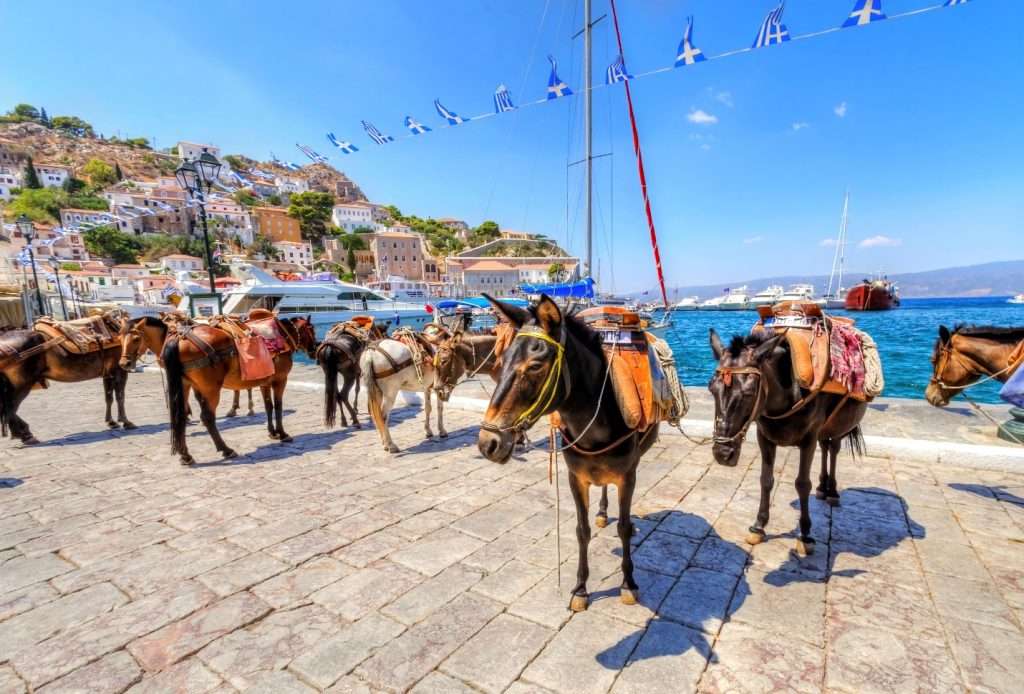 On Hydra itself, there are no motorcycles or cars. The only motorized vehicles allowed are rubbish trucks. Locals and tourists alike get around by bicycle, walking, donkeys, or boat. The harbor in Hydra is tiny as far as Greek harbors go. At the time that I was there, boats Med-moored (stern to) along the seawall and then other boats fit in three deep behind them in the little harbor. It was like a jigsaw puzzle. No one worried about it. If you were not lucky enough to be closest to the seawall, you simply took off your shoes and walked across the decks of the boats in front of you to get onto the promenade. We were moored second boat out, so sailors walked across our deck and we, in turn, walked across others, asking permission as we passed. It has been a number of years since I’ve been there, so I am not certain that this still happens, but it made for a comradery that we found delightful.

Since we came in by boat, we walked all through town. Being Greek Easter, we brought with us our boiled eggs, dyed red, which we had prepared in Athens. The red eggs symbolize the blood of Christ and cracking the shells signifies the breaking open of his tomb. We also had the traditional liver soup to heat up and eat with crusty Greek bread at midnight. At the end of the day, we sat on board, drinking wine and reflecting on the beauty of our day sail from Kalamaki Marina in Athens. We watched the activity as night fell, the darkness broken by the twinkle of the swaying mast head lights in the harbor and the lights that came on slowly on the hillsides of the port of Hydra. A procession came down one of the streets led by a priest carrying an icon, followed by his acolytes carrying placards with crosses on tall poles. The parishioners walked after them, all headed down to the sea. I am not Greek Orthodox, but the procession and the meaning of it for the villagers there in Hydra on Greek Easter was a moving experience for us all. 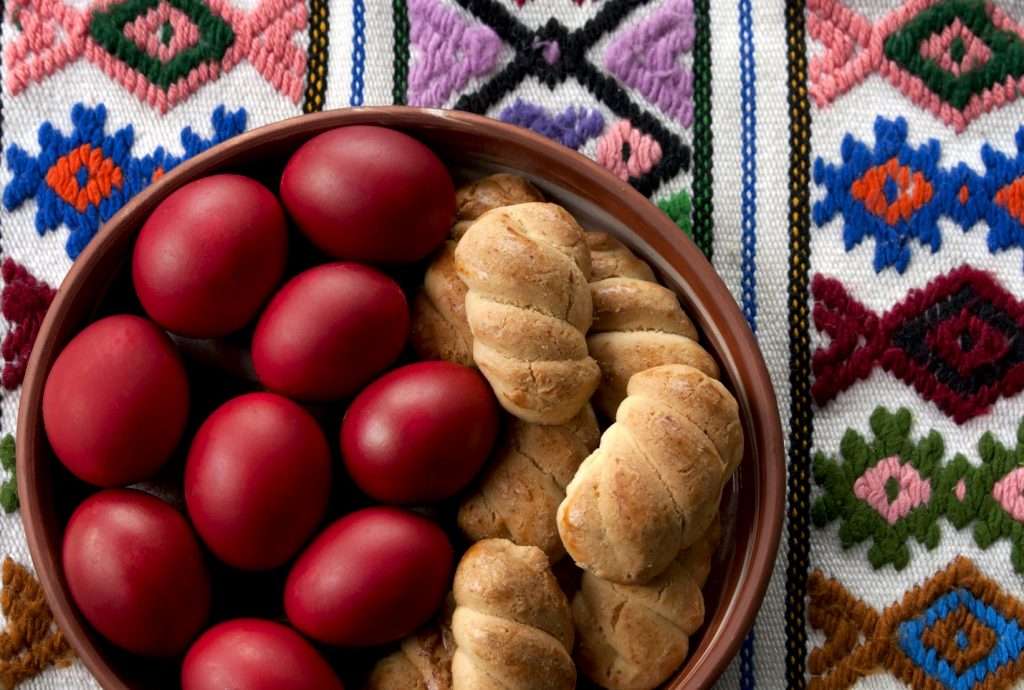 Cyprus in the Mediterranean Sea

Another island that I dearly love is Cyprus—an island divided between the Greeks in the south and the Turks in the north. Though I would have loved to have visited the Turkish part, I have never had the opportunity. One of my close friends lives on Cyprus and I have visited many times over the years and will go again sometime in the next couple years. It is so similar to Greece in both culture and climate. I probably have photos of every goat and gnarled olive tree on the island. So many wonderful places there, like the Baths of Aphrodite, Mount Oympus, and the village of Paphos. It is a wonderful place to holiday.

Malta and the Knights of St. John and Knights Hospitaller

Anyone who loves history will love Malta. The ancient capital of Mdina dominates the landscape in the center of the country. Fort St Elmo guards Valetta harbor. The stories of the Knights of St. John and the Knights Hospitaller tell how they helped pilgrims on their way to the Holy Land.

The Knights Hospitaller relocated and controlled Malta after their expulsion from Rhodes. Malta was the key to the Christian defenses at that time. The Knights managed to hold the island in the Siege of Malta which lasted from May to September 1565 and was critical in preventing the expansion of the Ottoman Turkish Empire into the western Mediterranean. The Ottoman force had 180 ships and 40,000 men against the Knights Hospitallers force of six thousand. The Knights lost three thousand while the Ottomans lost some 20,000 men and gave up the siege. 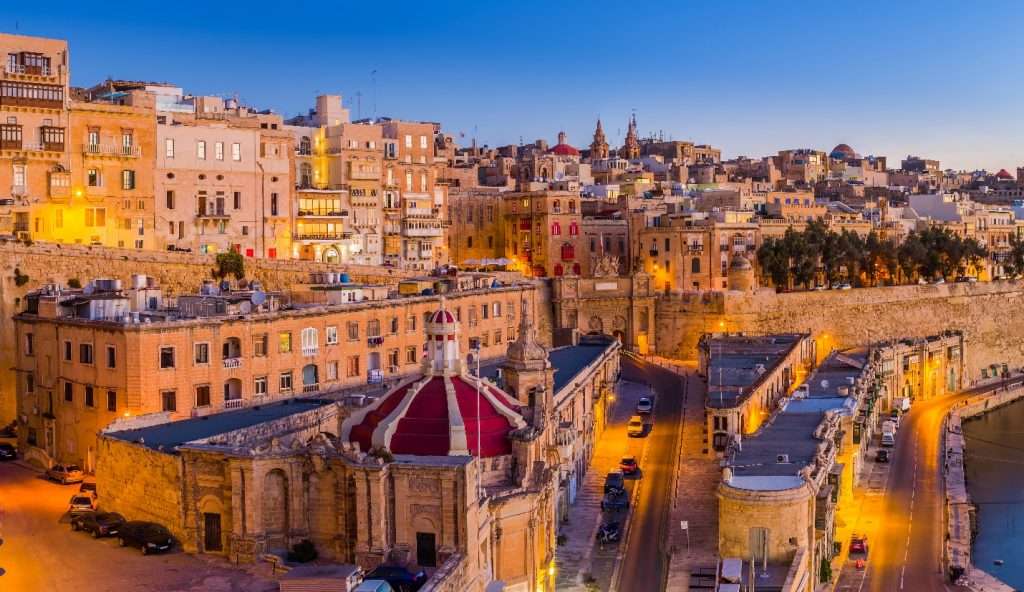 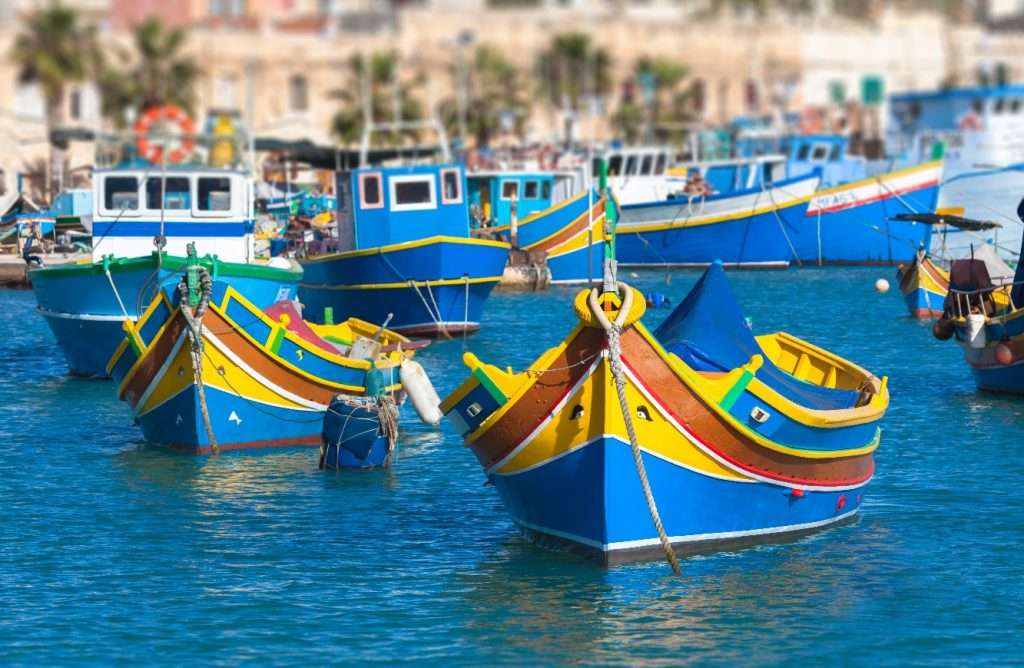 St. John’s Cathedral in Valletta was built by the Knights of St. John and finished in 1577. It has a marble tombstone floor that was made to honor four hundred of the knights. One can’t help but get caught up in both the history and the current culture of Malta. We spent ten days there and, again, it wasn’t nearly enough.

Traveling expands our understanding and stewardship of our planet

As you can tell, traveling is one of my most favorite hobbies. It brings me such joy and expands my knowledge of the world and its many peoples and cultures. As a writer, it helps me explore my creativity and my perceptions of others. It doesn’t matter if I travel far and wide, or if I visit a garden or a sculpture exhibit in my own city or one close to me, or even read a book or watch a documentary. Varied experiences and learning along the way have incredible value. It’s all good.

Anything we do to expand our horizons helps us grow and develop into more understanding humans and citizens of the world. We all need to be aware of the needs of our fellow man and our planet. With awareness comes the ability to shape and improve our own little corner, which is part of the greater whole. Even the smallest things we can do have a rippling impact for good. Our planet and the people who inhabit it need us all to do our parts in preserving and bettering the whole for the future of humanity. 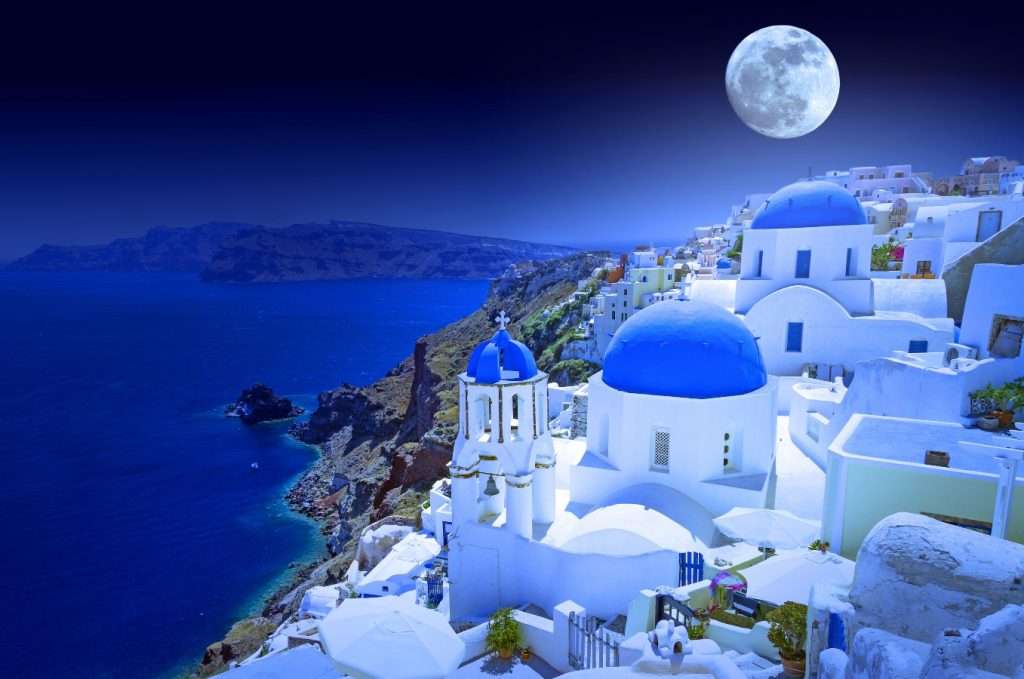 With luck and our good stewardship, places like the island of Santorini, another of my Greek favorites, shown here with a glorious moon in a peaceful sky, will be around for us all to enjoy for generations and, hopefully, centuries to come.